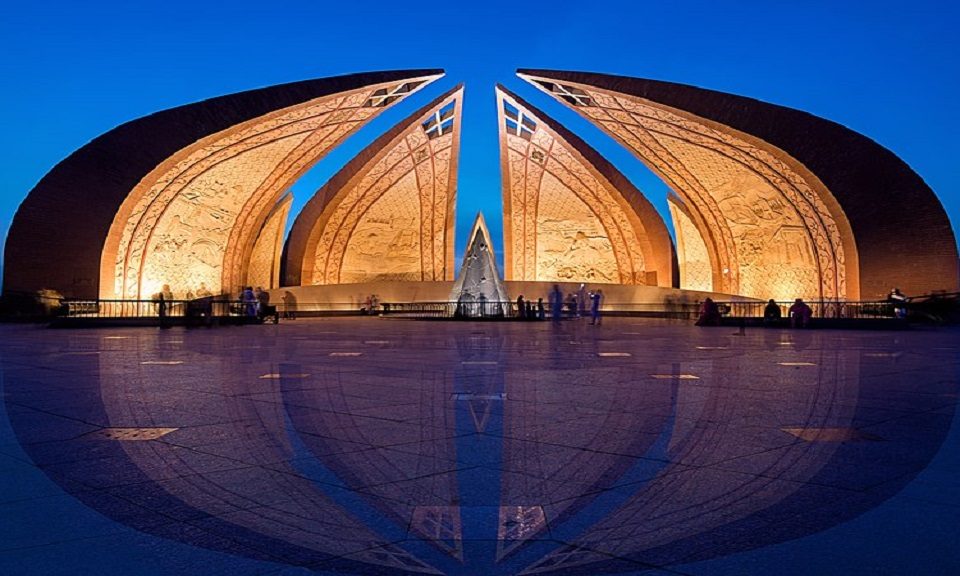 The monument was built to represent Pakistanis’ solidarity. It is committed to the Pakistani people who devoted their “today” for a brighter “tomorrow”. The four huge petals reflect Pakistan’s four major cultures: Punjabi, Baloch, Sindhi, and Pakhtun. Minorities, Azad Kashmir, and Gilgit-Baltistan are represented by the smaller petals. Because of its elevation, the monument can be seen from all around the Islamabad-Rawalpindi metropolitan area, making it a popular tourist site.

The Pakistan Monument is a national memorial and historical museum in Islamabad, Pakistan, atop the western Shakarparian Hills, Islamabad Capital Territory, Pakistan.

In 2002, former Pakistani President Pervez Musharraf proposed constructing a national monument in Islamabad. The proposal for just a National Monument was first conceived in 2002 either by the government of Pakistan and was later assisted by Mufti, the child of Mumtaz Mufti. The Ministry of Culture was tasked with organizing, through the Pakistan Council of Architects and Town Planners, a national monument styling competition based on the theme of symbolizing the strength, unity, and dedication of the Pakistani people into an icon chosen to represent an independent and free nation. Three applications were chosen out of a total of 21. Finally, the Pakistan Monument was given to Mr. Arif Masoud. Constructor Syed Mahmud Khalid oversaw the construction of the spectacular Pakistan Monument in 2006. On March 23, 2007, the Pakistan Museum was inaugurated and opened to the general public.

The monument’s design is based on the Subcontinent’s rich Mughal architecture. Its petal-shaped structure is inspired by Mughal muqarnas. “We must learn from the past but not live in it,” argues the architect. The four huge petals reflect the four cultures: Punjabi, Balochi, Sindhi, and Pakhtun. The three separate petals represent minorities, Azad Kashmir, and Gilgit Baltistan. Despite their independence, the seven petals come together to become Pakistan. They are standing together to safeguard Pakistan’s flag’s star and crescent.

Aside from the People’s Monument, there is also a museum that explains the history of Pakistan and describes the tale of its formation. The Freedom Plaza connects these two structures. Though the architect’s name-Arif Masoud-is in stone on the major Dedication Plaque placed at the commencement of the main plaza-he has recognized all building workers by putting their hand perspective all along the lengthy walls bordering this Independence Plaza on both sides. A viewing platform at the far end offers a birds-eye perspective of Islamabad City. From the air, the monument seems to be a star (center) and a new moon, which reflect the star and moon on Pakistan’s flag.

The monument’s flag star is made of gleaming black granite with gold stars representing those who gave their lives for Pakistan. The crescent moon is constructed of stainless steel and features inspiring texts by Quaid-e-Azam Muhammad Ali Jinnah and Allama Iqbal. The petals are constructed of granite (projecting in a cantilevered cantilever form, one of the largest in Asia), and their inner walls are decorated with artwork depicting major sites in Pakistan, significant persons from Pakistan’s independence movement, and musical and dance themes. Lahore Fort, khyber pass Badshahi Mosque, and Minar-e-Pakistan are among the landmarks depicted.

Glancing at the initial phase of the National Monument, visitors would notice the magnificence of Islamabad’s Faisal Mosque, Thatta’s Shah Jahan Mosque, Sindh’s Makli Necropolis, Gwadar’s harbour city, and the intricacy of the Rohtas Fort nearby Jhelum.

The second petal features photos of our founder, Muhammad Ali Jinnah, the Lady of the Nation, Fatima Jinnah, and historical places in Pakistan.

The Pakistan Monument Museum is extremely awe-inspiring, and one must applaud the endeavors of the designers, artists, and sculptors who have maintained national valuable history and rich culture in such an incredible way.

The amenities include a reference library, an audio-visual archive, a conference area, and Panorama Hall, a 62-seat theatre. In 2015, the complex had approximately 1500 tourists each day, for a total of 0.57 million visitors.

The Pakistan National Monument is one of the few recreational areas in the country that draws visitors from all over. The monument was created to showcase the country’s history and civilization, and it tells the tale of Pakistan, dedicated to those who gave themselves for future generations.” These sites represent Pakistan’s actual picture. The recent Capital Development Authority (CDA) initiative to begin its Margalla tourist train system has increased people’s ability to visit this magnificent place with ease. Masud Bilal, a local visitor, told APP that the visitor train allowed people to experience the best recreational spots and cultural legacy of Islamabad throughout its instructive voyage. He noted that the tourist train contributed to the promotion of tourism and cultural events in the Capital.

Islamabad, Pakistan’s capital, is known for its lush greenery and scenic beauty. One of Islamabad’s tourist attractions is Pakistan Monument, which is located on a hill in Shakerpriyan at zero point.

When you visit the monument, you will find a museum with gigantic photographs of Quid r Azam Mohmad Ali Jinnah, the founder of Pakistan, and other significant events for travelers’ information. These artifacts and events paint a clear image of our leaders, such as a currency book in which Quid Azam logged his income and expenses. Visitors to the museum can view the submitted cash in large quantities toward taxable income in the Pakistan treasury. Pakistani stamps, cash, and other essential information were presented in the museum.

Outside, we noticed stairs leading up to a monument with a spherical form that provides you an instant perspective of Islamabad and hand prints of workers who lost their lives in the past to build the Karakorum China Pakistan Road.

Overall, the memorial museum is a historical landmark to visit.