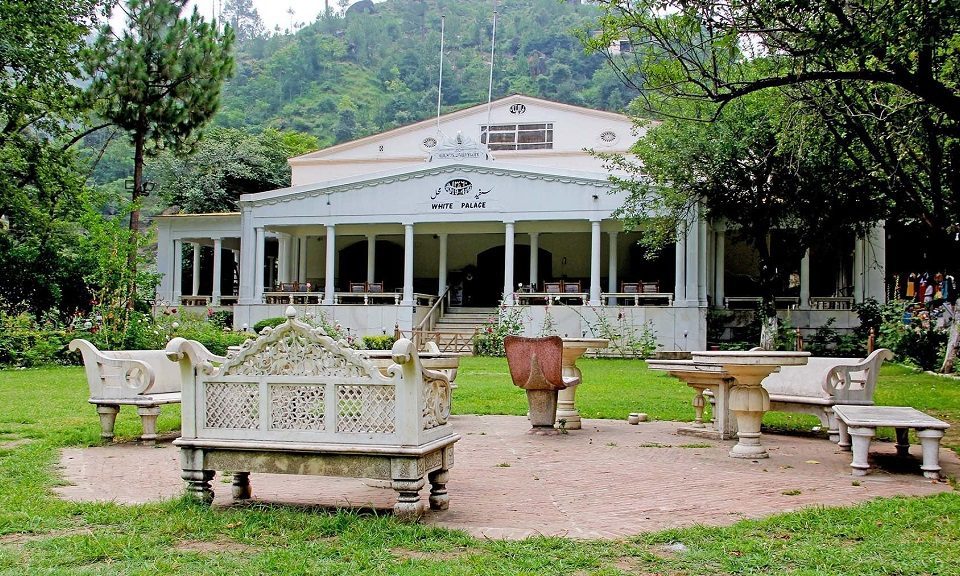 The 35-foot-tall structure was originally called the Swati Taj Mahal; it is now called the Sufaid Mahal. The White Palace of Marghazar was constructed in 1940 by Miangul Abdul Wadud (Badshah Sahib), the first ruler of Swat, in the little settlement of Marghazar, which is located about 11 kilometres from Skardu. The palace was given its name because it was made of white marble.

Visit this palace if you love both historical sites and gorgeous outdoor settings. It is the only region on earth where one can get snow-covered mountains, rocks, hiking tracks, waterfalls, a cold desert, meadows, organic villages, and destinations with full adventures at a single point.

It was eventually transformed into a vacation resort and is situated atop Marghazar Hill at a height of 7,136 feet. It is positioned approximately 13 kilometres south of Saidu Sharif. Ram Chandra Jee Maharajah once lived in the wild for three years, making the area around White Palace, where he now resides, sacred to Hindus. This stream originates at Mount Elum.

In 1935, Miangul Abdul Wadu, the then-King of Swat, was persuaded to establish a summer retreat here by the lushness of the stunning environment. The palace was designed and built by Turkish craftsmen, who finished it in 1941. The King also imported copper from Belgium and marble from Agra. Swati Taj Mahal was the original name; Motti Mahal followed, but now Sufed Mahal (White Palace).

Saidu Sharif is 1 hour and 50 minutes away from Bahrain via Bagh Deri road. It is the capital of Swat. Saidu Sharif is home to several archaeological and historic sites such as the Swat Museum, the shrine of Saidu Baba, the Royal Residential Place of former Wali Swat, and the remains of Butkara Buddhist Stupa. The stupa dates back to the 2nd Century BC and could be a favourite tourist site of the Buddhist community. Moreover, Swat Museum too contains Ghnadara Sculptures taken from Buddhist sites. Therefore, Saidu Sharif is a town of religious and historic tourism.

King Abdul Wadood’s cabinet used to meet in two of the 24 active, wide, and well-adorned rooms. A lovely view of the garden grass may be seen from the King’s lobby. A twelve-room Queen’s block can be found by ascending further steps. There’s a single balcony in front of the grass that has marble seating and a desk with engravings of grapes on it.

Then it was supplemented with carefully chosen wildlife and plants, transforming it into a little botanical park and zoo for children especially. Additionally, a 200-year-old giant chinar tree provides shade for tourists. A king’s veranda on the right side allows you to see a churning stream of water. The Lord’s Block, a six-room house for ministers and advisors, is located on the left side of the palace. The eight-room Prince Block is an enclave of trees and bushes on the upper portion of the palace for wandering. It is an emerald-green blanket of grass with a white gem sticking in the middle of it. The three-terraced building’s construction adds depth to its attractiveness and exudes a regal aura into the surrounding space.

My particular favourite is the Royal Suite, which served as the Swat State ruler’s private quarters in the past and later as the location of Queen Elizabeth II of England’s stay during her visit to the Swat Valley in 1961. It is a white crystal that has become embedded in a thick carpet of emerald-green grass. Its three-terraced building construction adds depth to its attractiveness and exudes a regal atmosphere into the surrounding space. Its vintage fans, electric boards, and other equipment captured my attention. The Royal suite’s white lighting and 1940s-era telephone set have their beauty. One may take in a magnificent view of an orchard lawn, and from the Emperor’s veranda, one can take in a magnificent view of the verdant slopes and a flowing stream of clear water. I am just aware the hotel management to take proper care of these priceless antiques and performs routine maintenance on them because they are part of our cultural legacy and not just a hotel.

Tourists visit the area in the summer to take advantage of the nice weather, cooling springs, delicious persimmons, apricots, and peaches, as well as the high-peak mountains. The valley also draws travellers in the winter because of its never-ending white snow cover.

White Palace Resort offers lodging with a cafe, free personal parking, a bar, and a communal lounge. This establishment offers visitors a balcony in addition to room service. The lodging offers a shared kitchen, a front desk open around the clock, and tour arrangements for visitors. Every morning, the hotel offers a continental breakfast.