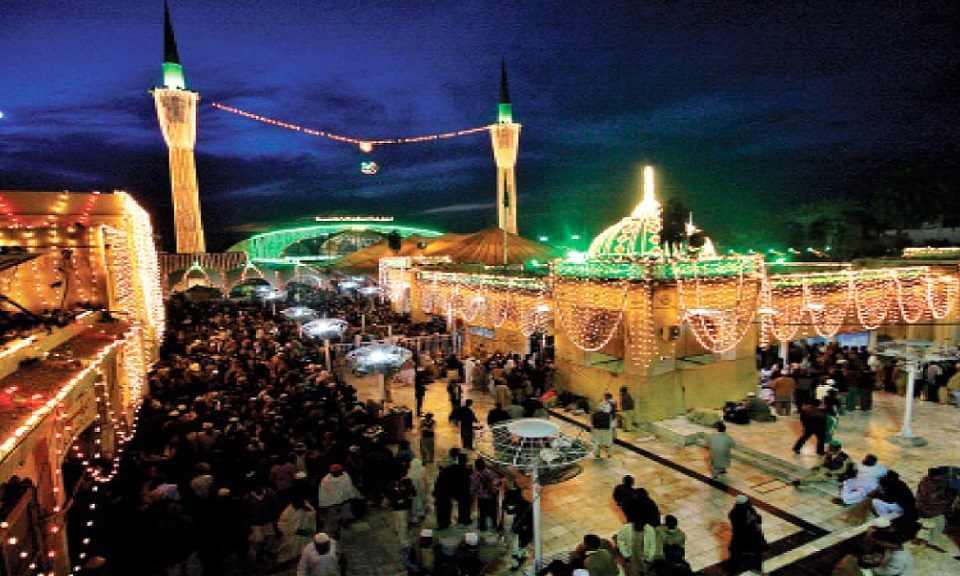 It was constructed for the remains of Ali Hujwiri, also called Data Ganj Baksh, a Sufi saint from Ghazni in modern-day Afghanistan who is thought to have lived on the site in the 11th century (c. 1009-1072/77). Abu ‘l-Ḥasan ʿAlī b. ʿUthmān b. ʿAlī al-Ghaznawī al-Jullābī al-Hujwīrī, known as ʿAlī al-Hujwīrī or al-Hujwīrī (also spelt Hajweri, Hajveri, or Hajvery) for short, or reverentially as Shaykh Syed ʿAlī al-Hujwīrī or as Dātā Ganj Bakhsh by Muslims of South Asia, Persian Sunni Muslim mystic, theologian, and preacher from Ghazna, It is one of the largest Sufi shrines in South Asia. It was constructed to honour Data Ganj Baksh, a great Islamic scholar who lived in the area during the 11th century. The shrine began as a modest graveyard near the masjid that Ganj Baksh erected in the 11th century, just on the outskirts of Lahore. The site is regarded as the most sacred in Lahore, and its yearly urs festival draws upwards of one million visitors. Khwaja Gharib Nawaz stayed at Ali Hujwiri’s mausoleum and quoted a tribute to him as a narration; گنج بخش فیضِ عالَم مظہرِ نورِ خدا ناقصاں را پیرِ کامل ، کاملاں را راہنما Ganj Bakhsh-e-Faiz-e-Alam Mazhar-e-Nur-e-Khuda, Na Qasaan-ra Pir-i Kamil, Kamilaan-ra Rahnuma.

The shrine began as a small cemetery near to the mosque that Ali Hujwiri built in the 11th century on the borders of Lahore. The shrine was extensively extended during the administration of military ruler Zia ul-Haq in the 1980s, becoming the highest in South Asia at the time. The mehfil-e-sama, a two-day qawwali music festival, has been held next to the shrine since 1965, however, it was moved to a local school in 1992. Even by the 3rd century, the notion that the spiritual forces of renowned Sufi saints were tied to their burial locations was common in the Muslim world, and thus a grander shrine was erected to memorialise Hujwiri’s burial site during the Mughal Empire. As a portion of the Auquf Act of 1960, the shrine came into Pakistani government authority, with the official purpose of stopping shrine caretakers around the country from economically abusing worshippers.

Hujwiri’s shrine is located in a Mughal-era tomb of sculpted white marble. A huge marble courtyard surrounds the tomb, and a new academic establishment at the shrine complex uses modernist architecture.

The location is regarded as the most sacred in Lahore. The shrine has grown as a major economic, social centre and political in Lahore, and it is one of the few sites in Lahore where highly rich and incredibly destitute coexist. Following the construction of a Hujwiri shrine, Muslims and non-Muslims alike visited his tomb in search of his blessings. Baba Farid, Chishti, Nizamuddin Auliya, Allama Iqbal, and Dara Shikoh were among those who paid homage to the shrine and pledged loyalty to Hujwiri. Former Prime Minister Nawaz Sharif paid frequent visits to the shrine. Devotees believe that the saint cremated at the shrine has supreme power over all Sufi saints inside the Indian subcontinent and that no fresh Sufi saint may enter the subcontinent without permission from the soul of Hujwiri.

At the shrine, Qawwali concerts are held regularly. On certain festivals, the shrine is illuminated, and thousands of pilgrims participate in dances as musicians perform Sufi melodies for hours. Muslims recite the Qur’an and pay honour to the Prophet Muhammad along the shrine’s perimeter. The shrine offers a variety of social services, making it a popular gathering place for low-income citizens. In a 1,000-year-old tradition, up to 50,000 tourists are given free meals at the temple every day. As a part of its social mission, the shrine also supports students’ education at adjacent schools and contributes to the funding of local hospitals. Patrons experiencing personal troubles frequently donate money or labour to the shrine’s free-kitchen charity, in keeping with Islam’s focus on feeding the destitute.

The shrine is accessible 24 hours a day and welcomes guests who enter freely. Daily, the shrine receives between 30,000 and 60,000 visitors, with the number increasing on religious holidays and Thursdays, the traditional evening for touring shrines.

According to the Auqaf Ordinance of 1960, the shrine is administered as a member of an Auqaf foundation. The shrine is overseen by about 200 full-time employees, not including security personnel. Out of the nearly 400 shrines under the Auqaf board’s authority in Punjab province, the shrine generates the largest money for the board, accounting for around 33% of the board’s earnings. The shrine makes four times more money than it spends on maintenance. Religious practices and discourses are subject to stricter government regulation at this site compared to other shrines in Pakistan.

The Bhatti Chowk terminal on the Lahore Metrobus serves the shrine.