Kharpocho Fort: A Hidden Gem in the Heart of Karakoram 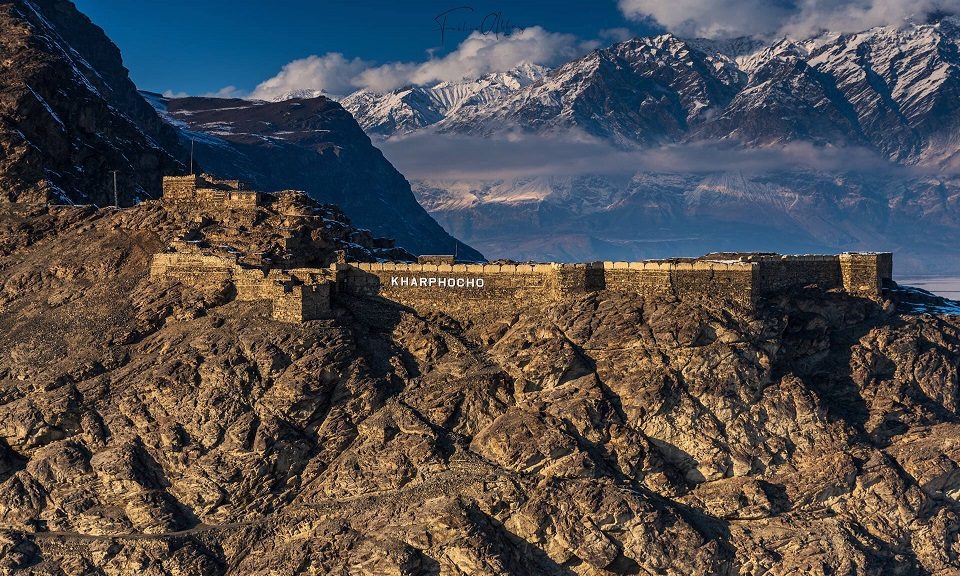 Beautiful and historically significant, the Kharpocho Fort is located in the Baltistan region. It is situated in the city of Skardu on a tiny hill flanked either by the Indus River, Pakistan’s longest river, on one side and Skardu city on the other and is approximately 30 minutes by foot from Yadgar Chowk, the main market on Skardu.

Located on a mountain, the fort towers roughly 40 meters above the city. On the side of the Indus River is where the fort is situated. The Indus River and Shigar River meet here, close to this Fort. The king and queen used to live here with their families, and the location has its unique prestige.

For those who are interested in archaeology and history, Kharpocho Fort comes highly recommended because it has a lot to narrate. Additionally, there are some words written in Persian on a rock that is fixed to one of the fort’s walls. After conquering the territory, the Dogra kings made Persian Baltistan’s official language. The presence of a mosque at the peak of the fort is evidence of the local population’s long-standing historical ties to Islam.

Discover Travelpakistani’s various and Best Skardu Travel Packages 2023–24 that may transport you to Attabad Pond and let you take pleasure in your time there. Robert Bates and Charles Houston, two American mountaineers, claim to have been “lavishly entertained” when touring the fort. A 20-minute trek up the mountain is needed to reach the fort, but it is worthwhile. The fort, which dates back in time, looks out over the confluence of several rivers. Great views of the valley are also provided.

In Pakistan’s Gilgit-Baltistan area, Skardu City is home to the Skardu Fort, also known as Kharpocho, which means “The King of Forts.” On a tiny mountain in the middle of the city, it is bounded on one side by the Indus River and the other by Skardu City. Greg Child, an Australian mountaineer, and filmmaker describe the fort as being “perched above the intersection of the rivers” and looking out over the Rock of Skardu.

Ali Sher Khan Anchan’s great-grandfather Maqpoon Bugha, who lived from 1490 to 1515 AD, constructed the fort (1560-1625 AD). The fort was constructed around the end of the 16th century by the ruler Ali Sher Khan Anchan. Under the direction of Maharaja Gulab Singh, General Zorawar Singh of the Dogra Rajput clan took control of the fort after realizing its significance in the town. His several military campaigns included one that included the annexation of Baltistan to the sovereign Jammu and Kashmir state. Ranbir Singh oversaw the fort’s destruction in 1857, which included leveling it to the ground. Aurangzeb, the Mughal emperor, too made an unsuccessful attempt to take control of a fort.

Lt. Col. Sher Jung Thapa oversaw Jammu and Kashmir Forces when they were stationed there in the fort during the first Kashmir War in 1947. Under Pakistan Army leadership, the Gilgit Scouts and insurgent State Forces soldiers besieged the fort.  Pakistani forces engaged the Skardu personnel of the fort in combat on February 11, 1948. The two fought for six hours before the assailants withdrew.

Numerous cozy rooms, both large and little, are spread throughout the historic building and are surrounded by a substantial boundary wall. It is worthwhile to visit and enjoy this location because of the woodworking and creative abilities used in building the Fort.

Thousands of tourists visit the majestic Fort every year, even though several of the vast chambers were destroyed by fire during the 1948 Gilgit Baltistan war. In the construction of boundary walls, large stones and gravel have been creatively utilized. To protect it from robbers and infiltrators, the Fort’s route is purposefully kept steep and narrow: a covert passageway linking the city and the Fort.

A hidden tunnel linking the town and the Fort was constructed at the time by the Rajas under the mountains. The ruling houses were not aware that this covert tunnel existed, and that it was utilized during the conflict. During your trip to the Fort, you can view the tunnel.

What is Ticket prize of Kharpocho Fort?

The ticket price is 200 for foreigners and 20 rupees for a local person.

Kharpocho Fort: A Hidden Gem in the Heart of Karakoram