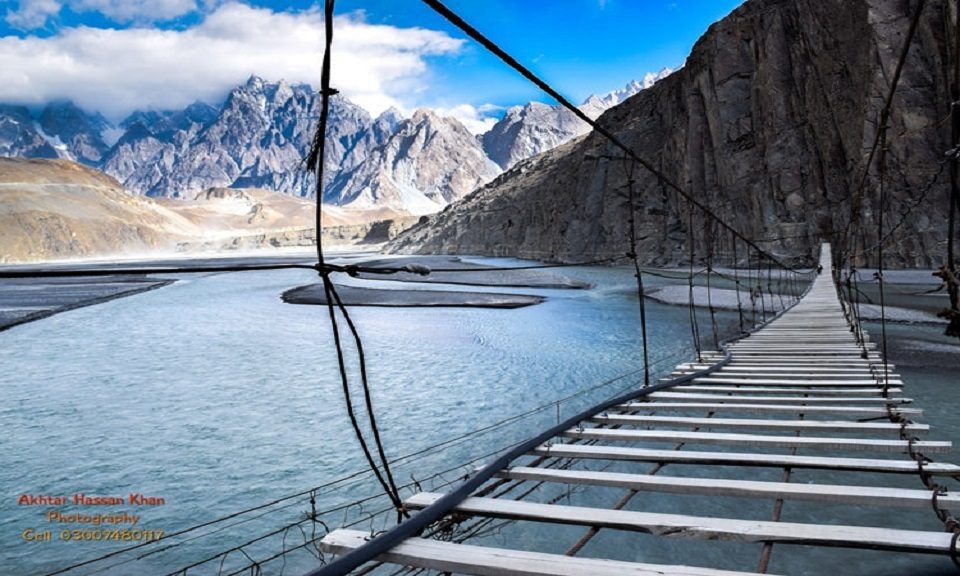 Hussaini Bridge is a swinging and dangling bridge 300 kilometres distant from the road, pointing down towards the river. This bridge is perilous due to the enormous gaps between both the boards and the erratic swing.

The Hussaini Hanging Bridge, which spans the Borit River, is an example of such a commute, but it has also become a popular tourist destination. Tourists consider the bridge to be the most perilous in the world, standing 100 feet over the river bottom and made up of 472 wooden planks. The bridge is approximately 660 feet long. The Hussaini Hanging Bridge is just one of the numerous perilous rope bridges in Northern Pakistan, which is known for having some of the world’s most dangerous bridges.

Linking Zarabad hamlet and Hussaini village is a bridge over the Hunza River. Small wooden boards that are about six feet in length that have been linked together by a sturdy rope form the foundation of this bridge. Each of these planks has a four-inch space between them, and metal cables that stretch from its ends link it to the posts that were driven deep into the towering, sturdy mountains, which serve as the bridge’s only source of support.

It is the world’s second-most hazardous bridge. A minimum of one foot must separate each stride. I was eager to cross this bridge, but after taking about 10 to 15 feet, it started to tremble. I panicked and turned around, but I could still sense the fear this bridge inspired in me.

There are no safety precautions or coast guards at this bridge because it is completely in the forest. Sadly, nobody would come to your aid if you fell into a river and were unable to get out—most often, the bodies of the dead were never discovered.

Visitors from Pakistan and other countries travel to view this bridge. It’s fascinating to learn about this suspension bridge’s past. During the British occupation of the valley, the bridge was built in Shishkat village in Gojal Valley; however, during the development of the Karakoram Highway, the bridge has been decided to move from Shishkat to Hussaini Village in 1968, as ordered by the Mir of Hunza, Muhammad Jamal Khan, to link Hussaini village to Zar Abad village on the opposite side of the river Borit.

This bridge across the Passu River in Higher Gojal Hunza is 64 metres long and 400 steps high, making it one of the most notable and perilous hanging bridges in the world. Passu Town is located in Gilgit Baltistan, near Gojal, in the upper Hunza region, in front of the Passu Cones, over the Karakorum highway.

Passu lies a few kilometres from Hussaini, a little settlement on the mountain’s backside. Furthermore, because of its mass and the people who cross it, this bridge is quite intense in the Center. Normally, only seven persons are allowed to be there at the same time (which is not observed). Before visiting this location, consider the weather and season. Aliabad Hunza is 45 kilometres and Gilgit is 132 km from Hussaini, respectively.

At a distance of 3 kilometres, the easiest option is the Passu suspension bridge. The boards are on lengthy steroids, and it takes a lot of time to cross 900 feet of closed wooden slats of the Hanging bridge rather than 700 ft of close planked. This bridge is accessible to all genders, however, the Passu suspension is more difficult for new and inexperienced visitors. And a daunting challenge for women in their forties. The bridge, which was built over 70 years ago, has become increasingly popular among locals. It is now the second oldest pedestal suspension bridge in the world; the first is most likely in Canada. In the north, Passu Cones appear to be kissing heaven. We have a large variety. Which river is the Hussaini Suspension Bridge built on? The solution is this bridge suspended over the Hunza River.

Hussaini Bridge has grown to be a well-liked tourist attraction, particularly for those seeking thrills and trying to face their anxieties. This is despite being hazardous and poorly maintained. The suspension bridge is used by Husseini village residents to travel to Zar Abad, where they have just relocated, and to transport agricultural goods. In addition to serving the requirements of the village, the bridge is now a popular tourist destination.